I'm so uninspired right now I can't even think of a name for this month's game!

The plan was to create a side-scrolling shooter in the vein of R-Type using the voxel engine I debuted during last month's Ludum Dare. I succeeded in doing so, but as time went on and I got distracted by other things the game fell by the wayside and I haven't finished adding all the content I wanted. 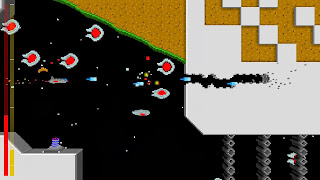 So what I'm throwing up this month is a very rough single-level alpha that's short of at least one more enemy type, a boss fight and sound effects. It's also pretty jerky as there's a whole ton of optimization (or indeed, re-writing) needed on the engine itself to support such high-speed games with voxels being destroyed all over the place. Another reason that I kind of lost interest.

You can play the game up until the end of the level. There's no player death and no "completion" as such, the level stops scrolling and that's your lot!

Next (this!) month's game will be something tiny as I'm also planning an XNA/Monogame/gamedev 101 workshop that I will be teaching in November. I'd like to look at an HTML5 framework this month if I have the time.

No builds for other platforms this month!