This month, I actually went with the theme for One Game a Month which was "Candy". As it is October and Halloween, I decided to try my hand at a Halloween-inspired game. As time was short this month, I re-used graphics from some previous titles: Dreamland, my still-on-the-back-burner Team Mango RPG with sprites drawn by Leon; and Hero Bash, my January game from which I took the basic platform tiles that were drawn by Paul. 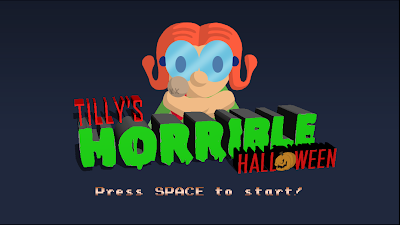 I also decided to get out of my comfort zone and follow through with one of my aims for One Game a Month, which was to make use of new/alternative technologies, engines and tools. In this case, I used HTML5 with the MelonJS engine.

The game itself is a very simple platformer which takes inspiration for the original Great Giana Sisters game. The main character is Tilly, who makes the leap from the Dreamland RPG to become an arcade platforming heroine. The idea is to collect candy and beat up the denizens that also emerged from the world of Dreamland.

The best thing about HTML5 games - no downloads! Clicky to play in most browsers!