I decided to take part in Github's Game-off 2013 competition this month. The competition is limited to web-only games and as I'd become familiar with HTML5 development, I figured it was a good fit.

The theme was "Change", which was also the theme of this month's 1GAM so that worked out quite well. I went with an idea I'd had kicking about for a bit which was to make a dungeon crawler where the dungeon is built from pieces that fall like Tetris blocks. Not a completely original idea, but it fit with the theme (ever changing dungeon) and I felt it was something I could implement in the three weeks of November I had left (I taught an XNA/Monogame workshop on the 11th so spent the first week of the month preparing for that). 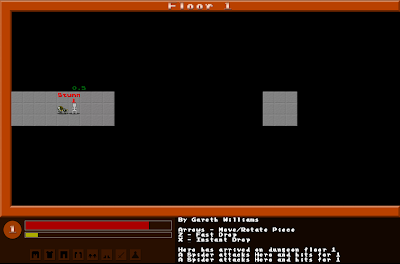 I used MelonJS again, but this time I wrote a lot of custom code and really only used Melon as far as rendering and basic entities.

An AI-controlled Hero explores the dungeon that you create with the falling blocks, which consist of floor and wall tiles as well as exit tiles, monsters, chests, weapon racks and health potions. The Hero will automatically fight the monsters that get placed, loot chests and other items to gain stats, and find its way to the exit once the dungeon is complete.

The Hero gains XP for exploring, so the larger an explorable area the player can create, the better.

I ran out of time before I got to add sounds or music (as usual), and I also wanted to spend time creating some combat animations and a particle engine as well as adding more things to improve the game's longevity. I'd probably have been happier with the game if I had that extra week to work on it, but I'm still not sure the base idea is any good.

Next month, for my final 1GAM entry of 2013, I'll be back to my Monogame comfort zone and creating an entry for Ludum Dare 28.

At least 40 hours on this one.

HTML5 again - no downloads! Clicky to play in most browsers!