I ended up shoehorning OO code into F#, the same way I'm sure many C# developers do when they first look at F#. I say shoehorning because that's how it felt. Even once I had been given a crash-course in functional development by Matt, I still felt that F# wasn't for me. Much of my issues come down to trying to fit a game, which is essentially one big state engine, into a language which is inherently stateless. I did, however, begin to find the syntax of F# rather charming and I could perhaps see myself employing it down the line - just not to write core game engine code. 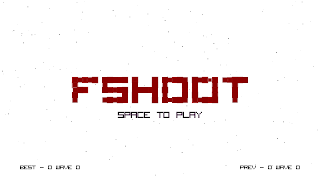 FShoot itself is a simplistic space-invaders clone. Not much to write home about, other than I chose to make the game using just particles. Every single object on screen is a particle or is constructed out of many particles. I think it makes for a cool aesthetic.

I haven't decided what I'm going to do for July. I think I'm running out of ideas, which is a really bad thing for someone who identifies themselves as a game developer. Still, I'm super chuffed to have made it this far (six months, six games!) and I'm not going to give up easily.

And Linux. This has been tested on Linux Mint 14 (Cinnamon), you may need to install libSDL-mixer (sudo apt install libsdl-mixer1.2). Run from a terminal (mono FShoot.exe). If it doesn't run, copy/paste the output into a comment below.