My final One Game a Month entry for 2013 came from December's Ludum Dare jam, and I teamed up with Paul for the last time this year.

We went into this LD with absolutely no game ideas, and we also had to cut the jam short by 24 hours, fitting our effort into two days rather than the usual three.

The theme was "You Only Get One", and after much scratching of manly beard on Saturday morning, we came up with the idea that you're on a plane that's crashing and there's only one parachute. We're just a bundle of laughs, we are. 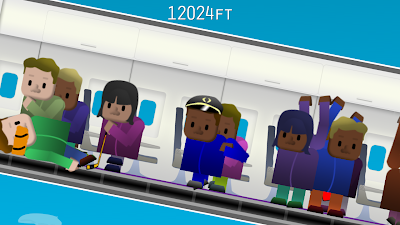 We injected as much humour into the mix as we could, and created a tight, fun game that plays for little more than a minute each time, but keeps you going back for one more go.

And that wraps up my One Game a Month effort for this year. I've decided not to take part in 2014, although I will still be taking part in as many LD jams as possible while working on my next big game. I'll be posting more about that in the new year. I also plan to do a more detailed post about what I've got out of 1GAM this year, as well as putting out at least one vide as a wrap-up.

We had about 40 hours to make this one.

And Linux. This has been tested on Linux Mint 14 (Cinnamon), you may need to install libSDL-mixer (sudo apt install libsdl-mixer1.2). If still no joy, run from a terminal (mono GoingDown.exe) and copy/paste the output into a comment below.