The end of August saw Ludum Dare 27, and Paul and I participated in the 72-hour Jam competition for the second time. Since finishing work on Hunted, I've been working on an all-new voxel engine that I intend to use in a couple of future games. Though still in its infancy, it was just about mature enough to use in the Jam

The result: Spatium Secondorum Decem, which roughly translates to Ten Second Room with my humble apologies to any Latin nerds that may read this! The theme for Ludum Dare 27 was indeed "Ten Seconds", and we had a basic idea of the game wanted to make before the theme was announced. 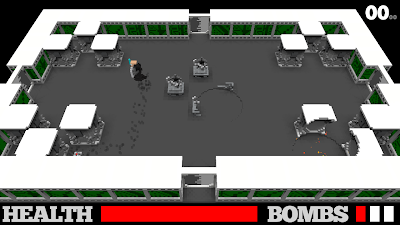 The game is a mish-mash of a number of games including Bomberman, Smash TV, Gauntlet and Binding of Isaac all wrapped around an idea based on the film Cube. Here's a short trailer of the game, with a few enhancements that were made post-competition:

The engine itself is possibly the most exciting and technical piece of programming I've undertaken, and I have a game planned for next year that will be my return to multi-month release-worthy games. I will more than likely make use of the engine for one more 1GAM entry, probably September's - but it will be completely different to Spatium, and nothing to do with the big game I have planned.

And Linux. This has been tested on Linux Mint 14 (Cinnamon), you may need to install libSDL-mixer (sudo apt install libsdl-mixer1.2). Run from a terminal (mono SpatiumSecondorumDecem.exe). If it doesn't run, copy/paste the output into a comment below.