This month's One Game a Month submission was created during the Ludum Dare jam, and I teamed up with Paul again who whipped up some fantastic graphics. Other Space was created in 72 hours.

At first, we struggled to match the game idea we had to the theme ("Minimalism"), but thanks to a huge lightbulb moment, we had our game on track by the end of day one. 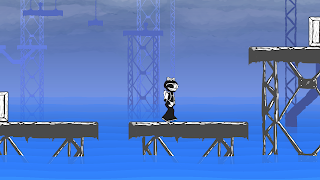 I'm not going to give away too much about the game, check out the video and screenshots. It's a short but (in my opinion) beautiful experience that I'm extremely proud of.

I have to say, I'm loving taking part in game jams. I'm not too sure I could do a solo one, but the two of us working together on something as awesome as Other Space and having fun while doing it is something I'm sure I'll be doing more of in future.

72 hours. And it seemed way shorter than that!

And Linux. This has been tested on Linux Mint 14 (Cinnamon), you may need to install libSDL-mixer (sudo apt install libsdl-mixer1.2). If still no joy, run from a terminal (mono OtherSpace.exe) and copy/paste the output into a comment below.